In 1995, Dr. Lauren Abramson introduced community conferencing in Baltimore. After learning about the process at a conference of the Silvan S. Tomkins Institute in Philadelphia in 1994, from Australian David Moore, Lauren attended the first facilitator training workshops conducted in the United States by Transformative Justice Australia.

Lauren became keenly interested in bringing community conferencing to Baltimore because of the power conferencing has to not only bring about important system reforms (e.g. in criminal justice and education), but to also co-power individuals, families and communities to resolve their own conflicts and crimes.

After three years of promoting this restorative process to local leaders in criminal justice, education and community development, the first Facilitator Training Workshop was held in Baltimore in 1998 with the support of the Governors Office of Crime Control and Prevention (GOCCP). The GOCCP then funded four Baltimore communities to build their own community conferencing programs, with Lauren providing technical support which was funded by the Maryland Judiciary.

The Community Conferencing Center is born

Total decentralization of community conferencing was not resulting in effective growth of the process or the programs. The need for a centralized organization to serve as a ‘hub’ for outreach, referrals, training, quality assurance, and evaluation became increasingly apparent.

Up to this point, Lauren had been coordinating community conferencing efforts on her volunteered time, which greatly limited the amount of effort to this work. In 1998, Lauren received an Open Society Institute Community Fellowship, allowing her to focus her work on developing and expanding community conferencing efforts in Baltimore and Maryland.

Lauren worked closely with Australian colleagues in elucidating the theoretical underpinnings of this effective process. One particularly unique aspect of our work is that it is grounded in our understanding of the role of emotion in bringing about both individual and group transformation.

As the use of conferencing grew in Baltimore, Lauren drew from research and theory, extracting and defining basic principles for both the conferencing process and for the implementation of the program, which has given rise to a model that allows for the effective use of community conferencing in a variety of sectors and with a variety of populations.

The Community Conferencing Center was born in the year 2000, unique in that it is the only broad-scale conferencing program in a large American city, providing theory-based services across several sectors.

Now called Restorative Response Baltimore, we also serve as the training and technical assistance ‘hub’ in Maryland. Working with over a dozen jurisdictions, we have helped establish community conferencing programs throughout the state.

RRB also receives inquiries about our work from other states and from other countries, and has worked nationally and internationally to assist others in establishing similar restorative justice programs.

Restorative Response Baltimore provides spaces and practices that serve as an alternative to the criminal justice system, enabling members of communities to work together in resolving conflict. 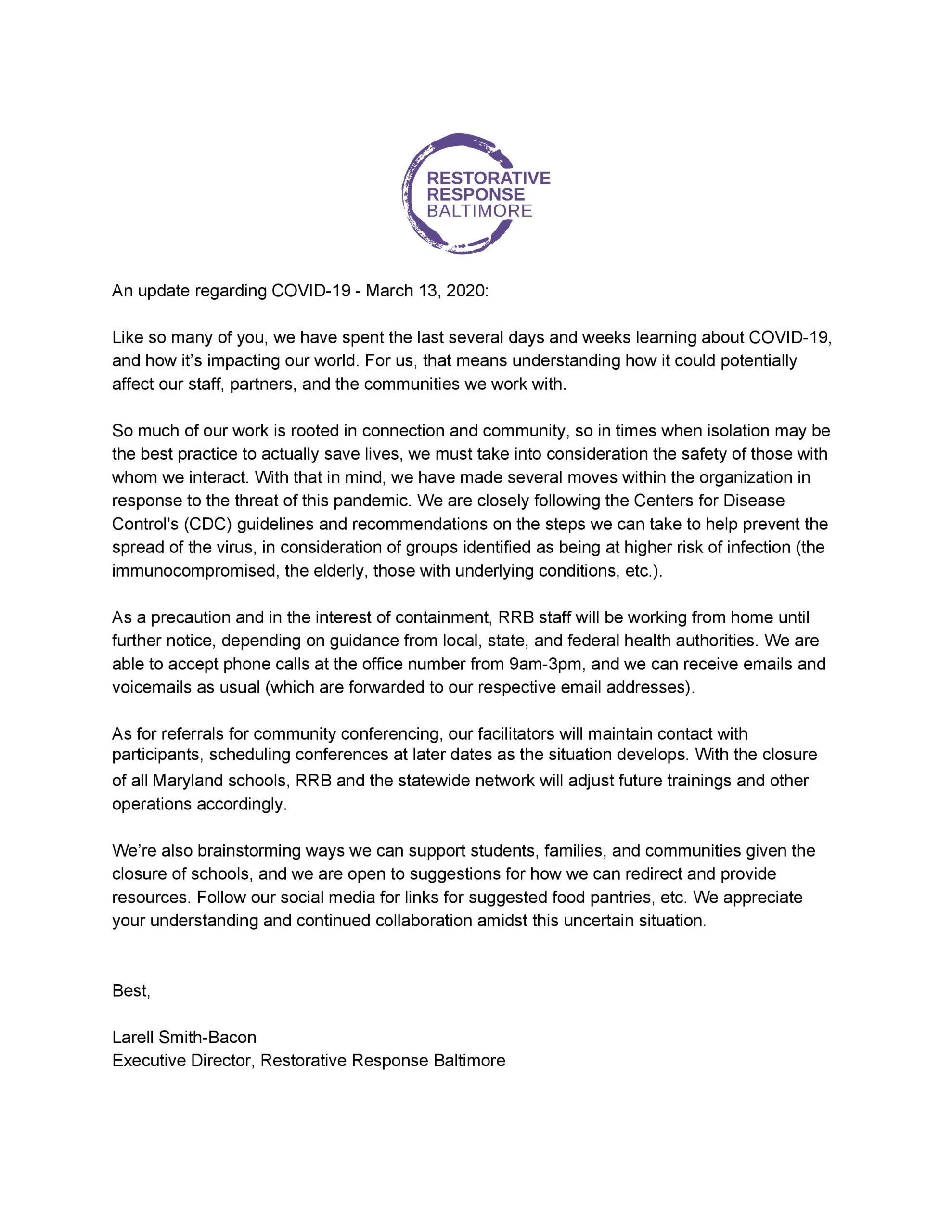